How to help learners feel less anxious before presenting a speech 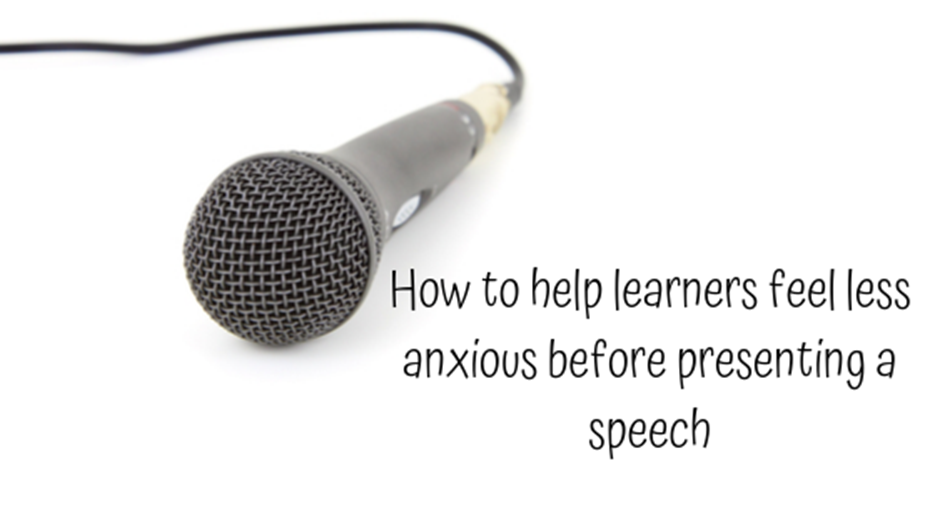 Fear is one of the biggest obstacles standing in the way of a learner becoming a successful public speaker.  Whether it’s a persuasive speech presented in front of a panel of adjudicators and a large audience, or an informative speech presented in front of a teacher and classmates, anxious feelings are sure to interfere with a learner’s performance.  Some learners will feel a little jittery right before presenting their speech, but others will feel progressively more stressed out and frantic for weeks before.

The problem with fear is that it can steal the words right out of the mouth of a learner attempting to present a speech and leave him literally speechless with all eyes on him!  This shakes his confidence and creates even more fear the next time he has to engage in public speaking.  So how can we help prevent or break this cycle of fear? We’ve put together a few ideas which can help you to help public speakers to overcome their fears and have their say.

You’ve probably heard a number of “what if…?” questions from learners who are going to present a speech.  Most of those questions are centred on their fear of embarrassment about “What if I can’t remember what to say next?” or “What if I leave something out?” Notes are a step in the right direction, but they will be about as useful as a waterproof teabag without lots of practice.  You might think of practice as having them parrot the entire speech from start to finish a couple of times before presenting it, but practice is so much more than that.  If something throws them off on the day of the speech such as mixing up their notes, a baby crying, or a cell phone ringing, they will find it difficult to recover, because they only know their speech in one big chunk.

Start by making sure learners understand the structure of their speech so that they know which parts go where and why it needs to be in that order. You can download our free introduction "How to write a WINNING persuasive speech" to learn more about the structure of a persuasive speech. After they understand the structure, make sure that they know what every word, phrase, statistic etc. means, because you can’t speak convincingly about something you don’t fully understand yourself! After that, have them learn the speech in smaller sections and then let them put it together. Ask them to present it as a whole and in parts by prompting them to start speaking from specific points in the speech.  Practicing in this way gets the learner very familiar with their speech, and gives them the confidence to know that even if something upsets them on the day, they have practiced picking up from various points in the speech so many times that they have nothing to worry about. It also makes learning the speech more fun, because they never know what you might ask them to do next. Just for fun you can ask them to reverse the entire speech starting from the conclusion and enjoy the look on their faces!

If you want to help a learner to become an excellent public speaker, you must let go of the idea that children should be seen and not heard. This may mean that you will have to count to ten a good many times in a day to remain patient.  You can’t expect a learner to speak convincingly and fearlessly in front of an audience if they are never given the opportunity to speak their mind in other situations.  Here are a few ideas to get you started on building their confidence:

Fear can be reduced by gradually increasing exposure to something which makes us fearful. This is part of a process called systematic desensitisation.  If you are afraid of spiders, you can gradually reduce your fear by first just thinking about spiders, then later looking at pictures of spiders, then even later holding a box with a spider inside and so on, until you can completely conquer your fear.  The same principle applies to public speaking.  Start learners off with small challenges like saying a prayer at table, and then help them to gradually work their way up to big ones like speaking in front of an audience. Change doesn’t happen overnight so you need to be patient and encourage them to be patient with themselves as well.

Most learners tend to imagine the worst possible outcomes when it comes to public speaking.  They fear things like tripping and falling on stage and having the entire audience laugh at them, or that their classmates will think they have the IQ of a rock if they freeze for a moment and forget what to say next.  It is important to have them verbalise these fears and then ask them if they really think things would happen in that way.  For example, if the worst thing they can imagine happening is tripping and falling on stage, ask them what they would do if they were in the audience and someone else tripped and fell on stage? Most likely they would feel very sorry for that person and be proud of them for getting up and carrying on, not laugh at them! Working through fears by talking about them helps learners to think more realistically about the worst case scenarios they have built up in their minds.

Learners also tend to expect themselves to be perfect on the day of the speech and they need to be reminded that even the best public speakers have mishaps and bad days and that’s perfectly okay.  The best of the best also had to persevere and practice for years to get to the top of their game. Help learners to realise that their expectations of themselves may not be realistic, especially if they are just starting out with public speaking.  Make sure that they understand that not being successful at a competition, or not getting top marks for a class speech, doesn’t mean that they have failed, just that there is still room for improvement.

Sweaty palms, a pounding heart, dizziness, nausea, struggling to breathe….. Anxiety can cause physical symptoms that have sent people to the emergency room thinking that they are terribly ill. Some learners will feel a little nervous before speaking in front of people, but others will have full-blown anxiety symptoms which create even more fear.  The most important thing to tell a learner who experiences these kinds of symptoms, whether mild or severe, is that the way they are feeling is completely normal and can’t harm them.

As uncomfortable as these physical sensations are, they are exactly the way your body would react if you were suddenly faced with a hungry lion that had you on their dinner menu as the main course! Your brain automatically tells your body to go into fight or flight mode so that you can cope with the imminent danger. Unfortunately your brain sometimes deals with things like public speaking in the same way it would if you needed to run for your life from a predator.

Knowledge is power, so empower learners to understand that the way they are feeling is their body’s natural reaction to something stressful.  This puts to rest their fears that something is wrong with them and makes those feelings easier to deal with the next time they occur.

Teaching them breathing techniques will help them relax

Breathing techniques can help lower stress and alleviate anxiety symptoms.  When you get stressed, your heart rate rises and your breathing becomes quicker and shallower. This leads to many of the uncomfortable physical symptoms we discussed before.  All of this leaves you feeling like you’ve run a marathon, but would very much like to actually run far away from the situation that is stressing you out! Slowing your breathing down counters your response to stress and helps you calm down and focus.  There are so many different breathing techniques to try and learners can decide what works best for them.  These are some simple ones which they can easily learn and then try out before they present a speech to deepen and slow their breathing:

With patience and practice, breathing techniques can be powerful weapons which learners can use to fight fear and perform at their best.  The best part is that breathing is a normal and in fact essential thing for humans to do, so they won’t feel too embarrassed to use these techniques whenever they feel anxious.

In conclusion, the famous outdoor survival expert Bear Grylls once said: “Being brave isn’t the absence of fear. Being brave is having that fear but finding a way through it.”  We sincerely hope that these anxiety-busting ideas will help learners find a way through their fear of public speaking so that they can speak calmly and confidently in front of any audience.